Open Banking (and as it expands to Open Finance) is a great leveler. It will broaden the horizon and provide opportunities for new players. At the same time, it will create product innovation across the board from FinTechs to banks, FIs, and BigTechs, and other tech companies. The dynamics of Open Banking may be invisible to the end-customers but they will enjoy the end result. The e-plumbing and financial rewiring that is happening will bring a seismic shift in how financial services are delivered and experienced by customers.

In last few years, Open banking has been changing the financial services landscape in countries where it is mandated (E.g., PSD2 in the EU, Open Banking in the UK, HK, Aus) and even in countries like India/US where the market is driving Open Banking at the back of great innovation such as UPI (Unified payments interface by NPCI) or in the US players such as Plaid and Finicity. It is now time to look at another very important associated trend and connect the dots.

Modernization of payments is not a small isolated trend but a paradigm shift in which we have a payment mechanism (like UPI) that needs no physical token (cards, fobs) or legacy infrastructure. It’s also cheaper and the source of funds is really your bank account itself. This change is happening all over the world (UK with Open Banking, Australia with NPP, and the US with Zelle), and it is happening fast. It will take time for this change (real-time payments, movement away from payment cards, tokenization, interoperability) to happen globally and for the adoption of true open banking to happen in a big way.

However, some people have started asking the question, “What is the point of payment cards (credit/debit card)?” Outside of niche use cases, such as international travel, cards seem to be losing that shine. If the payment cards go away (won't happen in absolute terms, but as it does slowly), it begs the question of what will happen to Visa and Mastercard. They created the payment card rails (credit and debit) but somehow may have missed the Open Banking bus.

So what are the card networks doing to stay relevant?

Earlier this year, the first few big shots were fired—Visa announced a 5.3-billion-dollar deal to acquire Plaid, a FinTech that connects popular apps (FinTechs and neobanks) like Venmo to customers’ data at the banks; simply put, data sharing via screen-scraping or APIs, and more.

Both Finicity and Plaid are so-called data aggregators. The US doesn’t have a PSD2 like regulation, but Open Banking has been market-driven, led by Plaid, Intuit, Yodlee, MX, Finicity, and others.

Visa and MC provided rails for credit and debit cards to connect banks to customers in the old world. And it works great. The new generation FinTech world—with digital commerce, huge volumes of mobile led P2P, and QR code based P2M mobile payments-is looking quite different. The setup and the players are different this time. In the US, as an example, data aggregators have assumed a lot of power and gained scale. They’re often called the Visa and Mastercard for Open Banking and FinTech. 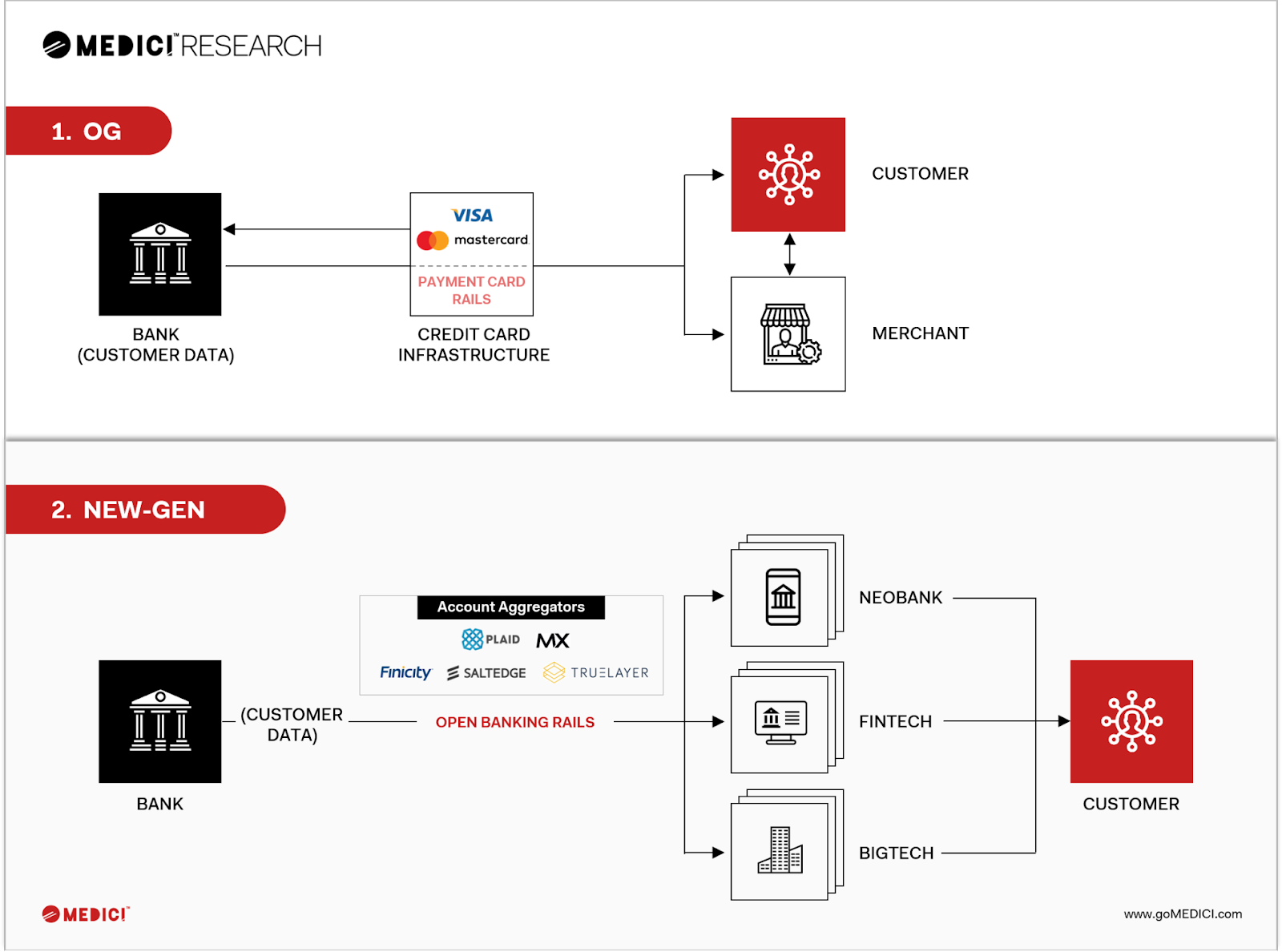 The new-gen rails are very digital and different; Plaid, Finicity, MX, SaltEdge, Truelayer, and other players shown in the illustration above are powering Open Banking. And now with acquisitions, Visa and Mastercard are moving here in the new-gen through acquisitions and other efforts, and they will continue to try to be relevant.

But why? Visa and Mastercard are large money-making, highly valued organizations, and are highly focused on financial outcomes in everything they do. They must have thought it through from a monetization perspective. So what is the big opportunity and the big rush? It’s an opportunity in the form of BigTechs, FinTechs, and consumer tech companies (or even others tomorrow) becoming FinTech companies or said differently integrating payments, lending, wealth, investments, insurance, and other propositions, or becoming a distribution platform for such products. It’s a massive opportunity.

Consider this: only in the US, card swipe fees generate about $80 billion a year that goes to banks, Visa, Mastercard, processors, and others. The opportunity to own the new rails is much bigger than even that. It’s a value creation opportunity of a lifetime in financial services! Secondly, Visa and MC also realize that APIs are going to be a game-changer in this modern hyper-connected world. The financial API companies are going to grow in terms of enterprise value over time. This is a great opportunity for them to own it and ultimately benefit their investors/shareholders as well. It's not just about financial services; it’s happening everywhere as shown by Daniel Levine (Accel Partners) in this TechCrunch article (developments from 2015 to Sep 2019): 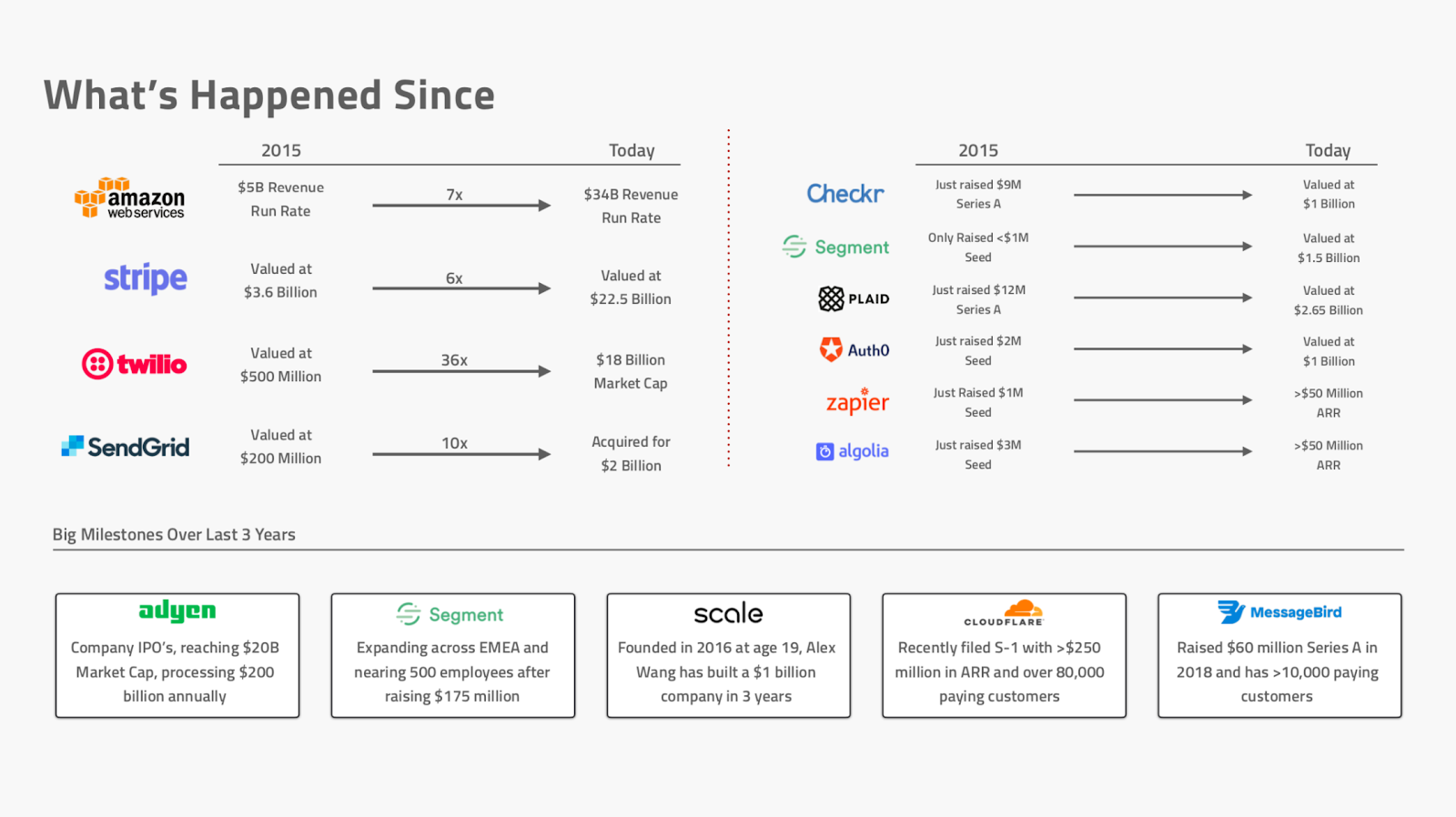 As BigTechs and many consumer tech companies are now adding FinTech offerings, they need rails. They need well-built APIs that the banks are not able to provide directly, for various types of functionality. Plaid, Finicity, Marqeta, Galileo, and a few others are making it easier. Important to note that when it comes to specific industries, BigTechs don’t like doing two things:

You see, that’s why Apple needs Goldman Sachs to execute its Apple Card. It needed Visa/Mastercard/First Data, banks, and others to make Apple Pay successful. Even newer consumer tech cos are behaving the same - that is why Chime needs Galileo and Robinhood needs plaid. When the underlying infrastructure is ready and easy to tap into the rails using well-built APIs, they come in with full force (Google Pay on UPI in India is a classic example), especially when it's a 15-trillion-dollar industry like financial services with a lot of scope with regard to improving things. 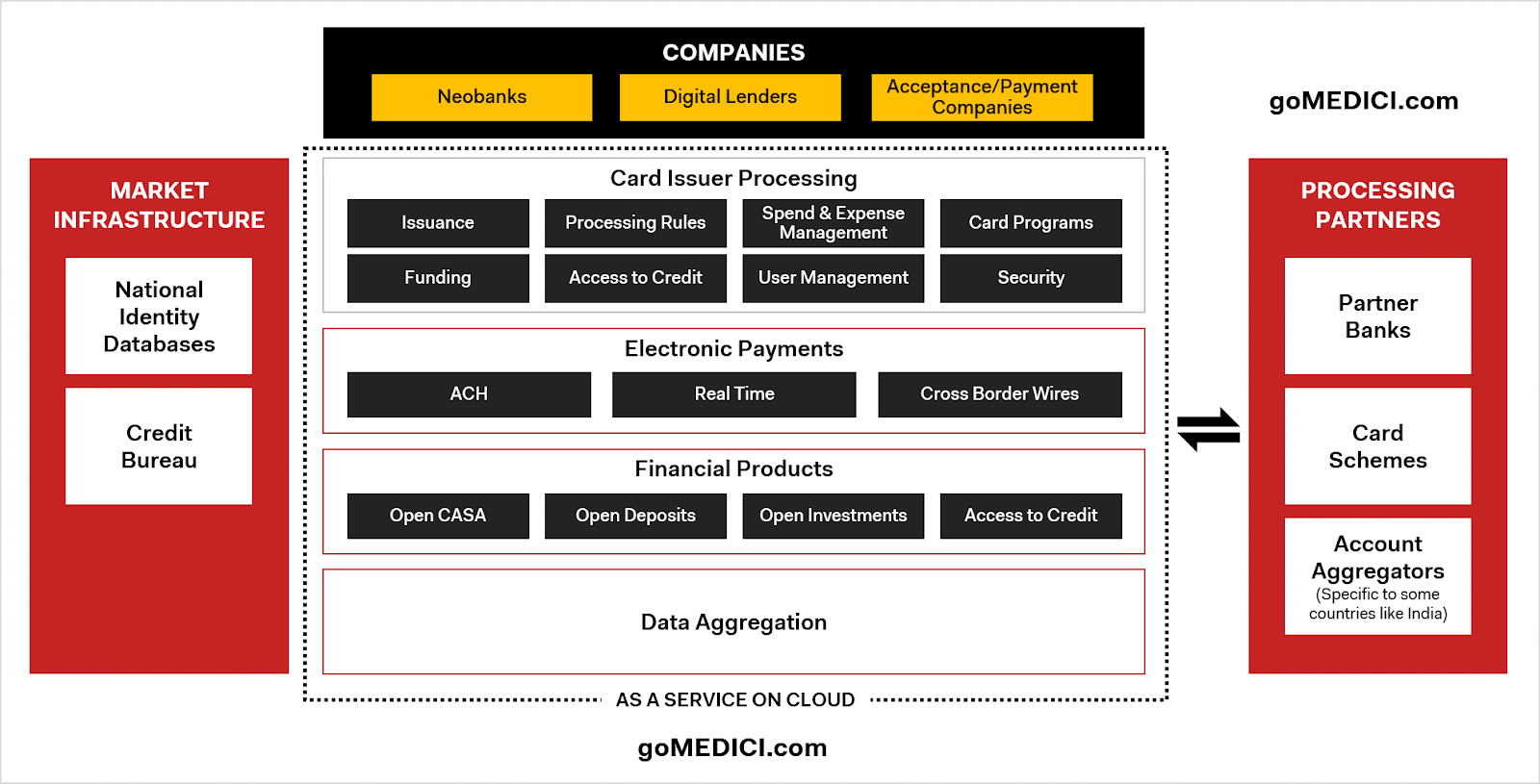 Expect a lot of action in this space as well.

Finally, I would say that Visa and Mastercard's direction (and efforts) should be a wake-up call for other firms in the big FinTech league. It’s undoubtedly good news for the banks (acquisitions of Plaid and Finicity) as they would prefer a Visa or Mastercard to hold the data and APIs for them securely and sustainably. From a Visa/MC perspective, you can argue, this is not entirely new. They have been watching and making their moves in the Open Banking and FinTech space. If you observe their investments closely, you will see a clear trend towards it. They both seem to be expanding rapidly from vanilla consumer-to-merchant payments into the broader sphere of all the different digital money movements through investments/acquisitions of sizable existing players. The extra focus on Open Banking and its efforts to partner/service FinTechs and BigTechs.

The movement from old to a modern Open Banking ecosystem is happening right now. Visa and Mastercard’s position in the traditional card segment doesn’t seem to be changing, but the payments market as a whole is changing. If they didn’t move now, it will affect their long-term prospects. And this is why I had said, “Visa & Mastercard created the card rails for banks, and hungry to own the Open Banking rails.”