Where Cryptocurrencies Are Growing Around the World

Countries are scored based on three indicators: Total crypto activity, trading activity by non-professional users, and peer-to-peer exchange trading volume.  All are measured at purchasing power parity per capita.

Countries are scored on a scale of 0 to 1. 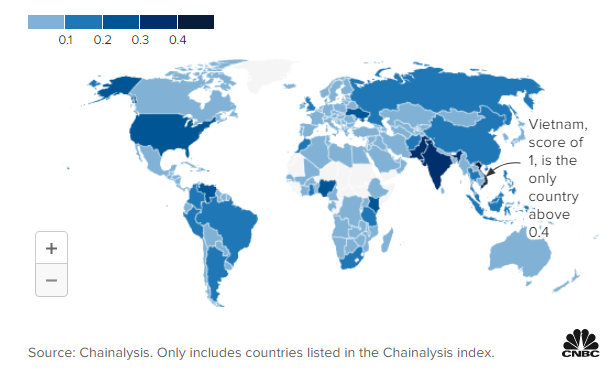 Global crypto adoption has grown by 881% in the last year, with Vietnam, India and Pakistan leading the way, according to new data from Chainalysis.

This is the second year the blockchain data company has released the Global Cryptocurrency Acceptance Index, which ranks 154 countries by metrics like peer-to-peer exchange transaction volume, rather than total transaction volume, which typically  support developed countries with professional and institutional crypto buying levels.

Chainalysis said the index's aim is to attract crypto adoption by "ordinary people" and "focus on use cases related to personal savings and transactions, rather than trading and  speculative".  The indices are weighted to combine the wealth of the average person and the value of money in general in specific countries.

The majority of the top 20 are emerging economies, including Togo, Colombia and Afghanistan.

Meanwhile, the United States slipped from sixth to eighth, and China, which went bankrupt this spring, fell from fourth to 13th. 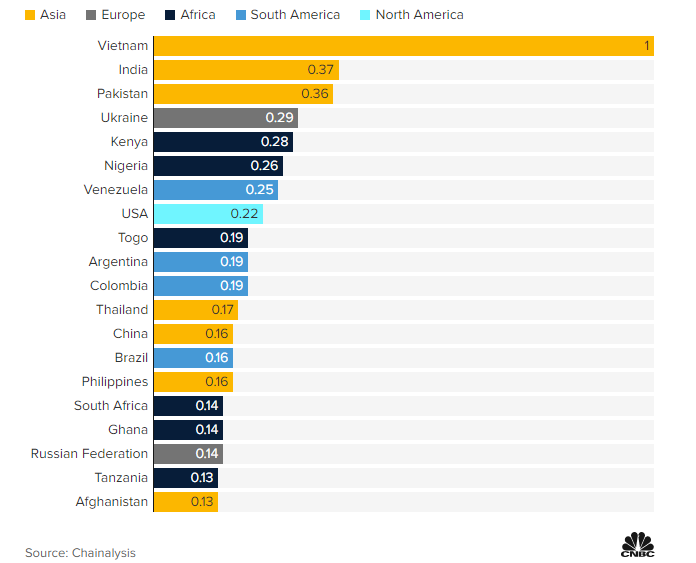 First, countries like Kenya, Nigeria, Vietnam, and Venezuela have huge transaction volumes on peer-to-peer or P2P platforms, when adjusted for purchasing power parity per capita and internet-using population.

Chainalysis reports that many residents use P2P cryptocurrency exchanges as their primary conversion base to crypto, often because they do not have access to centralized exchanges.

The report also states that many residents of these countries turn to cryptocurrencies to preserve their savings in the face of currency devaluation, as well as to send and receive remittances and make transactions.  business translation.

Matt Ahlborg, a peer-to-peer data analyst, told CNBC that Vietnam is one of the top markets for Bitrefill, a company that helps customers live off crypto by purchasing gift cards with bitcoin.

Chainalysis research director Kim Grauer, who compiled the report, said: “Vietnam stands out to me because it dominates the index.

“We've heard experts say that Vietnamese people with a history of gambling and young, tech-savvy people don't have much to do with their funds when investing in a traditional ETF, both of which are  promote the adoption of cryptocurrencies”.  Grauer said.

Nigeria is a different story, Grauer said. “It has a huge commercial market for cryptocurrencies. More and more commercial activities are being carried out on the rails of cryptocurrencies, including international trade with counterpart parties in China.”

According to Boaz Sobrado, a fintech data analyst based in London, these top-ranked countries have another thing in common. “Many people have control over capital or large numbers of immigrants and immigrants,” he said.

Take Afghanistan, a country currently in turmoil due to the recent overthrow of the Taliban government.

“Afghanistan makes sense above all from a capital control point of view, because it is very difficult to move money in and out,” Sobrado said.

Adjustments for purchasing power parity and gross domestic product may also have boosted its position, as Afghanistan is one of the world's poorest countries.

Analysts note that measuring crypto adoption at the grassroots level is not easy.

“The methodology has a huge blind spot,” says Sobrado. “Unlike many other countries, sanctioned countries do not have good and clear data on the P2P market.”

As a result, he said, he believes sanctioned countries like Cuba will be undervalued, simply because it's harder to track those transactions.

Ahlborg said there is no perfect way to measure global crypto adoption per capita, but the metric is “one of the best we have.”