SINGAPORE: The Cambodian central bank's digital currency has been named one of the 2021 Nikkei Superior Products and Services Awards Awards for Excellence for its innovative technology and impact on the country's economic and social development, Nikkei announced on Tuesday.

Bakong, the National Bank of Cambodia's blockchain-based nationwide payment system, will be officially launched in October 2020 and is recognized as one of the world's first central bank digital currencies (CBDC).

The central bank hopes that by creating an inclusive financial system in which people can perform basic financial transactions with their smartphones, it will contribute to the country's development.

The Bakong smartphone app can be used to shop and transfer money. People do not need a bank account to sign up for Bakong as long as they have a Cambodian mobile phone number. Users can send money by scanning QR codes or entering the recipient's phone number. Transactions can be made in either Cambodian riels or US dollars.

According to the central bank, the Bakong app had approximately 270,000 users as of November.

The central bank has partnered with local banks to operate and expand Bakong acceptance. As a result, the currency reached approximately 7.9 million people – nearly half of the country's population of 16.7 million – including those reached indirectly through partner bank apps. There were a total of 6.8 million transactions worth about $2.9 billion by November.

"Bakong enables interoperability among different players in the financial system, making digital payment easier and more efficient," Chea Serey, director general of the National Bank of Cambodia, told Nikkei Asia. "This interoperability between different players in the financial system would not only provide added value to end-users in terms of services, but would also help bridge the [gap between] banked and unbanked [and] rural and urban areas, thereby creating social cohesion."

"This is especially noticeable among migrant workers and students who leave their home villages to work or study in cities and require financial support from their families," she said.

The United Nations classifies Cambodia as a "least developed country." According to the World Bank, only 22% of adults had a bank or mobile payment account in 2017, far below the regional figure of 70% in East Asia and the Pacific.

One of the main reasons the central bank created the new digital currency was to create a system that would provide everyone with affordable financial services. Bakong, named after an ancient temple in Cambodia, was created in collaboration with the Japanese blockchain technology startup Soramitsu. 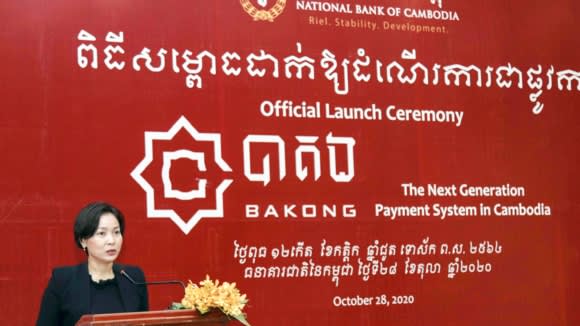 Chea Serey, director general of central banking at the National Bank of Cambodia, speaks in Phnom Penh on Oct. 28, 2020 during the Bakong launch ceremony.   © Kyodo

While promoting the use of Bakong on a domestic level, the National Bank of Cambodia is also working with international financial institutions. In August, it and Malaysian commercial bank Malayan Banking launched cross-border remittances via Bakong, allowing Cambodian migrant workers in Malaysia to quickly send money home.

"NBC efforts to promote cross-border remittances through Bakong are also expected to provide immigrant workers, particularly women, with better financial control by allowing them to send money efficiently to home country service providers, such as schools, hospitals, or [utility companies] without an intermediary," said Chea Serey.

Bakong is also a tool used by the central bank to encourage people to use the riel. Cambodia has a dual-currency system, with the majority of transactions conducted in US dollars. The central bank hopes that increased use of the riel via Bakong will aid in the management of monetary policy.

Bakong's launch has also increased the focus of other central banks on next-generation currency systems. According to a Bank for International Settlements survey released in January 2021, 86 percent of the 65 central banks that responded were actively engaged in some form of CBDC work. Almost 60% said it was "likely" or "possible" that they would issue a CBDC for retail use within the next six years.

China has begun testing a digital yuan in a few cities, and neighboring Laos is considering launching its own with Soramitsu's assistance.

During the year, the 2021 Nikkei Superior Products and Services Awards highlighted 16 products and services from Japan and other Asian countries.