Square to acquire Afterpay in $39b deal

Australia’s youngest ever billionaire said the $39 billion deal - which Afterpay’s board has recommended shareholders accept - will boost Afterpay’s growth in the United States, where it is facing tough competition from giant technology players, including PayPal and Apple.

“It recognizes the opportunity global buy now, pay later represents and a strategy to accelerate that growth at the inflection point we are in,” Mr Molnar told The Australian Financial Review in an interview from San Francisco on Monday.

“I think Square is the perfect partner for that. We are seeing incredible growth across our core business and [Square] provides a really strong foundation to accelerate our growth.” 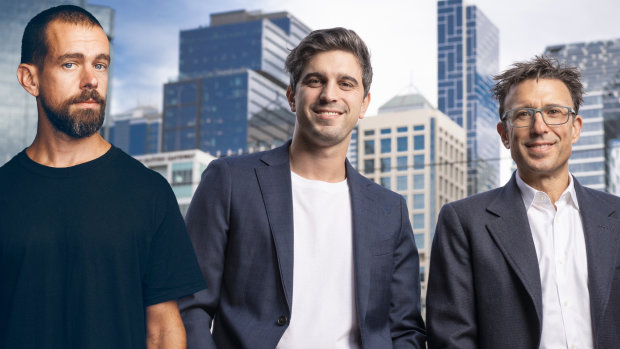 Jack Dorsey’s Square has agreed to pay $39 billion for Afterpay, co-founded by Nick Molnar and Anthony Eisen in 2014.

Mr. Molnar and Mr. Eisen, neighbors who founded Afterpay just seven years ago, will join Square when the deal completes early next year. Afterpay’s brand will continue inside Square’s payments ecosystem, which includes a consumer app used by 70 million Americans and payments hardware and software used by more than 1 million US merchants.

The Afterpay co-founders will each be paid $2.7 billion in Square stock for their Afterpay shares and will be able to trade their Square shares on the US or Australian market. Square plans to list securities on the Australian Securities Exchange.

Afterpay shares opened 27 percent higher on Monday morning and were trading at $115.96 just after midday, $10.25 below the implied deal price of $126.21 per Afterpay share, which was a 30 percent premium to its closing price last week. The price represents 42 times Afterpay’s 2021 revenue, a record sales multiple for a top 20 Australian company.

Afterpay was facing a long road to get to scale in the US on its own. It has almost 30,000 merchants and 10.5 million US users signed up to its platform but is dwarfed by the likes of PayPal and Apple and is facing more aggressive competition from the likes of Klarna and Affirm, which are listed on the Nasdaq in January.

Square said the deal will help it to integrate the consumer and merchant sides of its business and drive more retail sales via the buy now, pay later product.

“This is a transformative opportunity for our combined companies,” said Amrita Ahuja, the chief financial officer of Square, ahead of a briefing on the deal to be conducted from the US late on Monday night Australian time. “Afterpay has distinguished itself as a category leader in buy now, pay later, delivering remarkable growth in recent years and we see a number of levers to drive continued growth for Afterpay.”

Afterpay’s board, which met over the weekend to approve the deal, has unanimously recommended the transaction to Afterpay shareholders, many of which are based in the US or internationally. It will be facilitated via a scheme of arrangement.

This would become the largest M&A deal in Australian history and the culmination of an extraordinary journey for Afterpay, which was founded in 2014 and listed on the ASX in May 2016 at $1.00 share.

The deal will open up a much larger pool of merchants to Afterpay, and means it will not have to invest on its own to sign up merchants against much larger, deep-pocketed competitors, many of whom are copying its popular pay-in-four installment option, which has reshaped the offer of consumer credit.

Dana Stalder, a general partner at Matrix Partners, which backed Afterpay’s launch in the US in January 2018, told the Financial Review a combined Afterpay and Square will become one of the most exciting fintech companies globally and the paid “have the potential to build one of the world’s most important payments networks”.

“I think the combination of Square and Afterpay is a win for the shareholders of both companies and a win for consumers and merchants,” he said. “These are two innovative, founder-led companies with highly complementary products and uniquely aligned values and culture. The results should truly be extraordinary.”

The deal is expected to close in the first quarter of calendar year 2022 and still requires Square and Afterpay shareholder approval, and approval by Treasurer Josh Frydenberg under Australia’s foreign investment laws.

Local analysts said Afterpay investors are scrambling to understand the Square business to determine whether they should hold Square stock if the deal goes through or maintain holdings to provide exposure to any future gains. “There’s a bit of a learning curve for domestic investors and analysts,” said Milford Asset Management analyst Roland Houghton.

Square, which trades at a market capitalization of $US115 billion in New York, will set up a secondary listing on the Australian Securities Exchange. This will allow Afterpay shareholders to trade Square shares via CHESS Depositary Interests (CDIs) on ASX and Afterpay shareholders will be able to elect to receive NYSE-listed Square shares or CDIs.

Afterpay had said in April it was exploring listing its shares in the United States. However, this deal provides Mr. Eisen and Mr. Molnar with a more certain exit.

“Square and Afterpay have a shared purpose. We built our business to make the financial system more fair, accessible, and inclusive, and Afterpay has built a trusted brand aligned with those principles,” said Square CEO Jack Dorsey, who also runs Twitter, before tweeting about the deal.

The announcement of the blockbuster merger coincided with an Afterpay trading update, in which it said underlying sales for the 2021 financial year hit $21 billion, up 90 percent over the year. Sales in North America hit almost $10 billion, up 148 percent. Afterpay’s revenue of $925 million was up 78 percent.

Square has 70 million consumer customers, compared to Afterpay’s 16 million. Afterpay will be embedded into the Square Cash App, allowing Square to better compete with the likes of PayPal, Affirm, and Klarna by offering customers an integrated retailing experience.

The deal will also help drive its international expansion given Square only operates in four markets outside the US, with Australia being its largest non-US operation.

“We see compelling cross-sell opportunities given we will be combining complementary consumer and merchant ecosystems by integrating Afterpay directly into our Cash App and Seller businesses,” said Ms. Ahuja. “We intend to drive meaningful growth in our customer base and strengthen our products and build connections between merchants and consumers.”

Square has millions of merchant customers in the US, compared to 100,000 for Afterpay including 28,400 in the US, according to Monday’s trading update. Afterpay will be integrated into Square’s merchant platform to help drive sales for its customers.

Eisen and Molnar to stay

Mr Eisen and Mr Molnar, who first raised external funding for Afterpay in 2015 and have been vocal advocates for the development of a thriving local fintech sector, said the transaction “marks an important recognition of the Australian technology sector as homegrown innovation continues to be shared more broadly throughout the world”.

“It also provides our shareholders with the opportunity to be a part of future growth of an innovative company aligned with our vision.”

They will both lead Afterpay’s merchant and consumer businesses inside Square, reporting to Square senior executives Brian Grassadonia and Alyssa Henry.

Senator Andrew Bragg, who is chairing a Senate committee that has supported Afterpay’s export of services to the US by warning regulators including the Reserve Bank and ASIC not to hobble its growth, tweeted on Monday that the deal shows that Australian fintech is world-leading while “technology companies now come to Australia to list on the ASX”.

Afterpay said shareholders did not need to take any action at this stage. It will apply for a ruling from the Australian Taxation Office to confirm that the transaction will be tax-free for its shareholders.

Goldman Sachs and Qatalyst Partners are advising Afterpay, while Highbury Partnership is serving as financial advisers to Afterpay’s board. Gilbert + Tobin and Cravath, Swaine & Moore are Afterpay’s legal advisers.

Morgan Stanley is a financial adviser to Square while its legal advisers are Wachtell, Lipton, Rosen & Katz, and King & Wood Mallesons.

Afterpay shareholders will receive a fixed exchange ratio of 0.375 shares of Square class A common stock for each Afterpay ordinary share they hold. Square stock last traded at $US247.26 and is listed on the New York Stock Exchange.

Afterpay said it will send a scheme booklet setting out the board’s reasons for recommending the deal and an independent expert’s report in due course.

What we learned while writing our book about Afterpay

Square said Afterpay will be accretive to its gross profit growth and it would conduct a modest decrease in its EBITDA margins in the first year after completion of the transaction. Under the terms of the stock, deal Square could pay 1 percent of the consideration in cash.

Like Afterpay, merchants can use Square to reach buyers online and in person, but Square has a broader offering, including offering merchant financing. The Square Cash App also has wider functions than Afterpay, including investment options.

Square is releasing second-quarter financial results in the US on Monday and will brief its investors about Afterpay on Monday night Australian time.